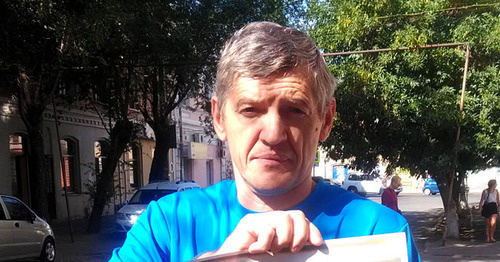 In 2015, Igor Stenin, a public activist from Astrakhan, openly stated rights violations of Russian residents of the region and organized an action in support of the rights of the Russian population.

Igor Stenin was nominated for the "Hero of the Caucasus-2015" contest of the "Caucasian Knot" for his persistence in defending his civil stand without fear of persecutions.

On January 2015, Mr Stenin was detained at the rally dedicated to memory of the local woman Galiya Borisenko, of whose death natives of Northern Caucuses were accused. The rally was organized by the "Russians of Astrakhan" community. The participants of the rally also protested against the appointment of Tagir Gadjiev, a native of Dagestan, to the post of the Military Commissar of the Astrakhan Region.

On January 22, agents of the FSB (Russia’s Federal Security Service) searched Igor Stenin’s apartment and took him to the FSB Department for the Astrakhan Region, where Stenin was charged with public calls for the actions aimed at the disruption of the territorial integrity of the Russian Federation.

On September 27, Mr Stenin and four activists held an action demanding to release Nadezhda Savchenko, and stop the war with Ukraine and escalation of hatred among the brotherly Slavic nations.

On October 21, 2015, the Sovietsky District Court of Astrakhan fined Igor Stenin by 1000 roubles, finding him guilty of posting, in his page on a social network, an allegedly extremist video clip "Orange Sun 14/88".

On November 13, 2015, Igor Stenin and other activists held a picket at the building of the Regional Duma, demanding to take measures for preservation of historical monuments of the regional capital.

On December 12, Igor held a picket against violations of Constitution in Russia, coming out with a poster "There is a holiday, but no Constitution!"

On January 7, 2016, three activists, including Mr Stenin, held an action in support of Ildar Dadin, convicted on charges of numerous violations of the rules of holding actions, and Alexander Belov (Potkin), one of the leaders of the nationalistic movement "Russians".

Igor Stenin was born on October 24, 1965, inAstrakhan, where he received his secondary vocational education.

In December 2012, Igor Stenin founded, in the social network "VKontakte", a community named "Russians of Astrakhan", the members of which held various actions aimed to attract the attention of bodies of power to obvious social problems, existing in the Astrakhan Region and in Russia as a whole.

Since 2013, the members of the community held such actions as "Russian May Day", "Russian March", "Against Increase of Petrol Prices", "Help Political Prisoners", "Against Ethnic Crimes", as well as against increase of gas and heating tariffs, and many others.

On May 16, 2016, the court found Igor Stenin guilty of public calls for extremism and sentenced him to two years in a settlement-colony.

In June 2016, the Human Rights Centre (HRC) “Memorial” declared Igor Stenin to be a political prisoner, since the investigators, the prosecutor’s office and the court "exhibited an extreme degree of partiality and bias," associated with political motives of the criminal case initiated against the nationalist.