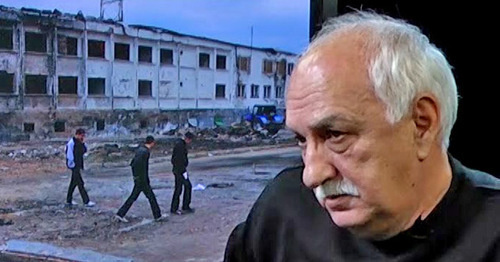 In 2015, Ruslan Martagov, a political analyst from Chechnya, made a number of statements on arbitrariness of the authorities of the Chechen Republic and persecutions of the dissent.

He was nominated for the "Hero of the Caucasus-2015" contest of the "Caucasian Knot" for his courage to publicize the facts, which were usually silenced.

In April 2015, Mr Martagov spoke out in the programme "The Putin's Faithful Infantryman", dedicated to another clash of the Chechen leader with power agents of the Ministry of Internal Affairs (MIA) of Russia, having stated that this Kadyrov’s demarche would not anyway affect his career within the Putin's vertical of power. In fact, the Chechen leader possesses the whole set of institutions of an independent state, which highly irritates the block of Russian power agencies; and at the moment, "Chechnya is a hybrid of the medieval Bukhara and the modern Copenhagen. By appearance, it is Copenhagen, but by morals and customs within the republic it is the medieval Bukhara."

In November 2015, Ruslan Martagov said in his interview to the "Caucasian Knot" correspondent that Ruslan Mukhudinov, accused of organizing Boris Nemtsov's murder, and Ruslan Geremeev, a suspect in this murder case, could take refuge in Chechnya with the approval of the head of the republic, since only Ramzan Kadyrov could give a protection document in Chechnya.

In December 2015, speaking on air of Radio Liberty, while discussing the letter of Ilya Yashin to the head of Chechnya, Mr Martagov was sceptical about any Ramzan Kadyrov’s full and adequate response. Mr Yashin was free to ask any questions, but "answers would be in the style of responses of Chaika to Navalny's revelations – everything is fine here; the ISIL and terrorists are guilty of everything. And Yashin will leave the republic with these answers." However, more likely, he wouldn't even reach Grozny, whereas all decisions are made on the very top, while Kadyrov is just a performer – "therefore, nobody will ever give Mr Yashin a chance to arrive in Grozny with his documents."

In January 2016, on air of Radio Liberty, while discussing the construction of the “Akhmat-Tower” in the midst of economic crisis, Mr Martagov expressed an opinion that the construction of a new elite skyscraper was just another whim of Ramzan Kadyrov, who had received a complete carte blanche from Russian President Vladimir Putin.

Ruslan Martagov was born on March 19, 1950, in Kazakhstan where his family was exiled during the deportation of Chechens in 1944.

Mr Martagov is the author of several stories and novels about Chechnya in the genre of military prose.

In 1992, Mr Martagov began cooperating with the Chechen newspapers that were standing for the preservation of unity with Russia.

Since 1993, he was in opposition to Djokhar Dudaev and was a member of the armed movement against the separatist course of Ichkeria – anti-Dudaev opposition (VSChR). The Prosecutor's Office of Ichkeria initiated a criminal case against Martagov for an attempt of a putsch. The separatist authorities declared Martagov as "people’s enemy" and the Prosecutor's Office of Ichkeria sentenced him to execution in absentia; even a man was appointed to enforce the sentence.

In 1995, under the head of Chechnya Doku Zavgaev, Ruslan Martagov headed the press service. In August 1996, he became the Acting Minister of Press and Information of Chechnya. After the conclusion of Khasavyurt agreements (on August 31, 1996) and restoration of Ichkeria, he left the republic.

In 1997, Mr Martagov was for the second time sentenced to death by Sharia court.

In 1999-2000, he headed the press service under Nikolai Koshman, the Plenipotentiary Envoy of the Government of the Russian Federation in the Chechen Republic, through whose patronage he received an apartment in Moscow, but constantly lived in his patrimonial village of Znamenskoe in the Nadterechny District of Chechnya.

In 2005-2006, Ruslan Martagov worked as a consultant of the “Antiterror” Foundation.

On September 1, 2016, Ruslan Martagov, having come home from Grozny, told the "Caucasian Knot" correspondent that he had been invited to the ministry to be interviewed as the person who was the Minister of Press and Information of Chechnya in the period between the first and second Chechen wars.

Later, on the same day, he received a call again from Grozny by employees of the ministry, who told his that journalists who had arrived from Germany wanted to talk to him. In the evening, on his way home, he called his brother, saying that was going home.

After seven o’clock in the evening, Ruslan was out of contact; his telephones were switched-off.

Said-Selim Abdulmuslimov, the Deputy Minister of Information of Chechnya, reported that on September 1, he had communicated with Martagov; they even made photos; and then they called a taxi and sent him home.

On September 2, Djambulat Umarov, the Head of the Chechen Ministry of Press, stated that the authorities of the republic had seen no enemy in the missing political analyst Ruslan Martagov. According to his version, prior to Martagov's disappearance, they agreed that he would write an article about the Ichkeria regime.

On September 3, Ruslan called from his phone to his sons and daughter, saying that everything was all right with him. He said that he was with his friends and asked not to worry about him. But right after the call, his phone was switched off again.

On September 4, Elena Milashina, a correspondent of the "Novaya Gazeta", reported that Martagov had come back home.

In the evening on September 4, the TV Channel “Grozny” showed a report with the participation of political analyst Martagov, who explained his disappearance by the fact that he was visiting his friend. Local observers were sure that this report was a staged one.

The report showed that Martagov’s interlocutor was Shamil Kutsaev, the Head of the Nadterechny District of Chechnya, a former employee of the Republic’s Ministry of Internal Affairs (MIA). It was reported that the conversation took place in the apartment rented by Martagov in the centre of the village of Znamenskoe, Nadterechny District.

Martagov claimed that there was no kidnapping; and the whole story with his disappearance was only a casual combination of circumstances. Experts, however, noted that other victims of kidnapping in Chechnya also gave same refutations.

Ruslan Martagov is married and has three children.