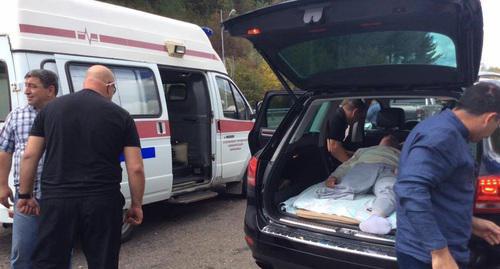 Ruslan Gvashev, detained on his way to Krasnodar, was released by the police only after the rally in his support was over. Gvashev said that he was surprised by the massive nature of the spontaneous action.

The "Caucasian Knot" has reported that today Gvashev stopped his hunger strike at the request of the above rally in his support.

"I’ve achieved what I wanted – a unification of my people," Mr Gvashev has emphasized.

Murat Bekukh, a participant of the rally, has stated that he had come to the courthouse to demand from the authorities to stop persecuting Gvashev. He has noted that the action was spontaneous.

Ruslan Gvashev, 67, a former head of the Board of Elders of Circassian Shapsugs, was on his hunger strike since September 11 in protest against the fine imposed on him for praying at the Tulip Tree. Today, the Krasnodar Territorial Court has postponed the consideration of his appeal complaint until October 16.

For Gvashev, his hunger strike was a matter of honour, said Naima Neflyasheva, a Senior Researcher at the Centre for Civilization and Regional Studies of the Africa Institute the Russian Academy of Sciences, who is running her blog, entitled "Northern Caucasus Through the Centuries", on the "Caucasian Knot".