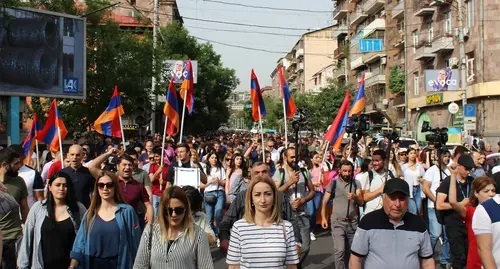 Participants in a march to the presidential residence, where the meeting of the CSTO Council of Foreign Ministers is being held, state that the participation of Prime Minister Nikol Pashinyan in the negotiations on Armenia and Nagorno-Karabakh illegitimate.

The “Caucasian Knot” has reported that on June 8, opposition supporters held two protest actions in Yerevan and announced a march in connection with the visit of Russian Foreign Minister Sergey Lavrov to Yerevan. At a protest action near the Russian Embassy held on June 9, the opposition accused Sergey Lavrov of putting pressure on Armenia over the Nagorno-Karabakh issue.

Today, the “Resistance” opposition movement has held a march from Square of France to the president’s residence. On Bagramyan Avenue, the police blocked the road for the marchers, and the activists stopped and did not move further, the “Caucasian Knot” correspondent reports.

According to organizers of the march, they do not see an alternative to the CSTO in Southern Caucasus, but they still have a number of questions to the organization. In particular, the activists accused the CSTO member countries of supporting Azerbaijan during the 44-day war in Karabakh in 2020. According to the oppositionists, at the today’s meeting of the CSTO Council of Foreign Ministers, the Armenian authorities should raise precisely those questions and demand answers.

“CSTO member countries can get support from [this] organization, but Armenia has not received any assistance from the CSTO,” stated Aram Vardevanyan, a member of the “Hayastan” opposition bloc.

Gegam Manukyan, an MP from the “Hayastan” bloc, believes that Nikol Pashinyan cannot participate in resolving the strategic issues of Armenia and Nagorno-Karabakh. According to him, the opposition will do everything to present the whole situation in the country, to show the political crisis every time when foreign delegations are in Armenia.

This article was originally published on the Russian page of 24/7 Internet agency ‘Caucasian Knot’ on June 10, 2022 at 11:23 am MSK. To access the full text of the article, click here.