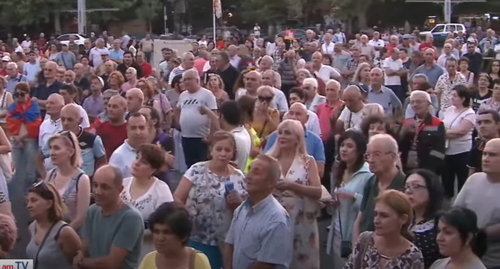 During the time that Nikol Pashinyan is in power in Armenia, the issue of international recognition of Nagorno-Karabakh's independence has disappeared from the country's political agenda; the living standards have gone down; and corruption is flourishing, the members of the oppositional "Resistance" movement have stated.

The "Caucasian Knot" has reported that on July 19, the participants of the action held at the UN office in Yerevan demanded the release of political prisoners.

Narek Mantashyan, an oppositionist, who was released after his seven-month-long arrest, has stated that activists are in jails for their political views and patriotism.

At the rally, Ishkhan Sagaelyan, a former Vice Speaker of the National Assembly (Parliament), has announced Pashinyan's resignation as the main opposition's goal.

Tadevos Avetisyan, an MP from the "Ayastan" faction, has accused authorities of indifference to country's social and economic problems. According to his story, the state debt has grown by 40%; and authorities have brought the country to a debt crisis.

Menua Sogomonyan, an oppositionist, said that the demand for Pashinyan's resignation has united people; regardless of their political viewpoints, they want to get out of the crisis.

Prior to Pashinyan's advent to power, such an agenda was the international recognition of the independence of Nagorno-Karabakh, but it disappeared after the 44-day war in 2020, Mr Sogomonyan has added.

He has stressed: "Moreover, Pashinyan is trying to close the topic of Artsakh (the self-name of Nagorno-Karabakh) ... He wouldn't understand that, having lost Artsakh and pursuing a failed policy in all areas, Armenia couldn't either peacefully or better."

This article was originally published on the Russian page of 24/7 Internet agency ‘Caucasian Knot’ on July 30, 2022 at 00:30 am MSK. To access the full text of the article, click here.