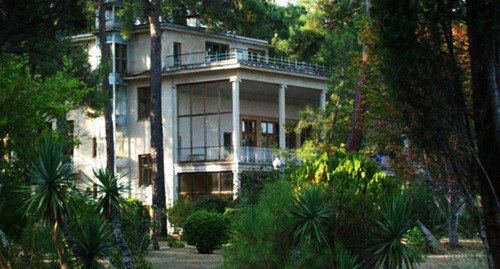 The materials on the agreement on the transfer of the "Pitsunda" state dacha to Russia have been returned to the MPs, while the Constitutional Court (CC) invited them to state their position on the issue in the appeal. They were given three days to correct the documents.

The "Caucasian Knot" has reported that on July 22 the Parliament of Abkhazia asked the CC to check the above transfer agreement for its compliance with the law. Some of the Abkhaz politicians pointed to the inadmissibility of the alienation of people's property, while others emphasized that the agreement does not provide for the transfer of Abkhaz land to Russia.

The Abkhaz CC has returned the above request and materials to the Parliament. According to the definition of the acting head of the CC's staff, in the appeal, the applicant (the MPs) must state their position on the issue and give the legal justification thereto. Besides, the Parliament's request fails to provide the provisions that contradict the Abkhaz Constitution, the "Abkhazia-Inform" reported on August 3.

The applicant has the right to appeal against the return of the request within three days, as well as to re-send the appeal to the CC after the correction of the documents.

This article was originally published on the Russian page of 24/7 Internet agency ‘Caucasian Knot’ on August 4, 2022 at 01:49 am MSK. To access the full text of the article, click here.