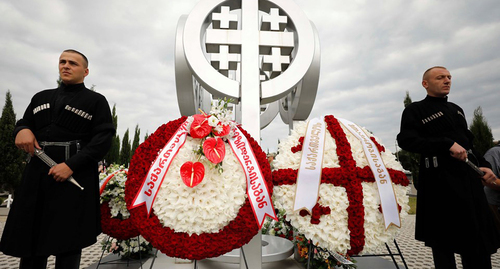 Today, in Georgia, state flags have been lowered to half mast on administrative buildings in memory of the victims of the Five-Day War. Memorial services were held in Georgian churches on the occasion of the 14th anniversary of the outbreak of the armed conflict, and MPs proposed to name 15 streets in Tbilisi after the fighters who perished in August 2008.

The “Caucasian Knot” has reported that on August 8, 2021, relatives of those killed in the “Five-Day War” visited the fraternal cemetery in Tbilisi. Five European countries, including Latvia, Lithuania, Romania, Slovakia, and Slovenia, several members of the European Parliament and members of the US Senate spoke out in support of the territorial integrity of Georgia.

The Russian operation “to enforce peace” took place in Georgia, Abkhazia, and South Ossetia in the period from August 8 to August 12, 2008.

Let us remind you that on August 7, memorial services were held in the temples of South Ossetia on the eve of the 14th anniversary of the beginning of the Five-Day War.

This article was originally published on the Russian page of 24/7 Internet agency ‘Caucasian Knot’ on August 8, 2022 at 01:00 pm MSK. To access the full text of the article, click here.