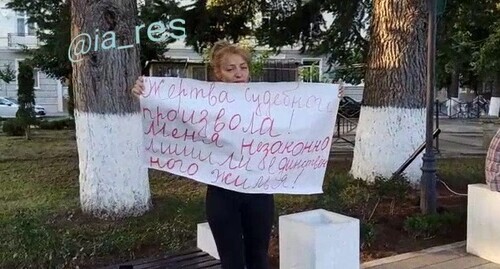 Female picketer in Tskhinvali asks for help in returning her housing

Alina Djioeva, a resident of Tskhinvali, who was evicted from her housing by a court ruling, has called on authorities to help her return a part of the house that her uncle had sold to another person. The uncle had received the right to inherit the house illegally, the deal can be challenged, an advocate asserts.

On August 9, Alina Djioeva held a solo picket in Tskhinvali. According to her version, she "went out to the square out of desperation," since on August 9, court marshals evicted her out into the street by a court judgement, the "Res" News Agency has reported.

The picketer has claimed that she would stand in the square until the leadership of South Ossetia pays attention to her problem. According to Djioeva, she was "illegally deprived of her only housing."

For more than three years, Alina has been trying to sue her uncle Vitaly Djioev for a part of the house, which she considers to be her own. She says she has no claim for the whole house, but only for that part thereof, where she made repairs at her own expense, after it was destroyed during the war.

The house was inherited by Vitaly Djioev by a court decision. However, Fatima Gatagonova, an advocate, believes that violations were committed during the transfer of the house. In particular, Vitaly Djioev filed an application to establish the fact of his inheritance more than six years after the death of his mother; he presented the court with photocopies of documents, the authenticity of which is in doubt, the advocate has noted.

This article was originally published on the Russian page of 24/7 Internet agency ‘Caucasian Knot’ on August 10, 2022 at 01:45 am MSK. To access the full text of the article, click here.

Court decides to evict tenants of barracks in Nazran, Tskhinvali: court to decide on legality of actions of families who voluntarily moved into a new house, Rostik Khugaev: families occupying new building in Tskhinvali to be evicted.