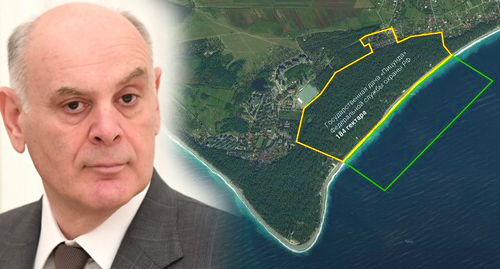 The "Caucasian Knot" has reported that on July 22, the Parliament of Abkhazia asked the Constitutional Court to check the above agreement for compliance with the law.

On August 17, in Sukhumi, at a meeting with the members of the Public Chamber, President Bjaniya said that he considered it right to ratify the agreement on the transfer of the "Pitsunda" state dacha to Russia. In his opinion, the agreement poses no threats to Abkhazia.

He assured that the agreement does not provide for the sale of land, "this is not even discussed." "Land is no point; the agreement is on buildings and structures that are located on this territory and need major repairs, and, possibly, a partial demolition," Mr Bjaniya has stated.

He excluded that the dacha could be transferred to third parties. According to his story, in accordance with Article Six of the agreement, "the Russian party shall use the facility, the land plots and the sea section for holding state events with the participation of persons subject to state guarding in accordance with the Russian legislation, as well as for their recreation." "This agreement prohibits the transfer of this object to third parties," Aslan Bjaniya has explained.

The refusal to ratify the agreement could complicate relations with Russia, the president believes.

This article was originally published on the Russian page of 24/7 Internet agency ‘Caucasian Knot’ on August 18, 2022 at 00:58 am MSK. To access the full text of the article, click here.