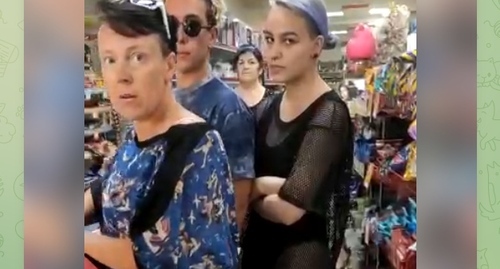 The author of the video with remarks to tourists visiting Dagestan about their appearance behaved aggressively and was sparking the conflict despite the tourists' apologies, Telegram users have noted in the comments to the video.

The video of the conflict of a local resident with tourists has been posted on the "Dagestanskie Izvestiya" Telegram channel. "Another conflict with tourists because of the appearance occurred in Dagestan," the caption to the video says.

The record begins at the entrance to the store, after which the author filming the video enters and approaches the queue of people near the cash-desk. He draws attention to a girl in a bathing suit and a transparent cape. "How has this miracle got in here? You can't dress normally, can you? Are you at home or something?" he asks the girl angrily. The young man next to her stood up for the girl, which caused even more anger in the author of the video. "You weirdo, I'm going to rip your ear off," he says.

Many commentators to the video have condemned the local resident's aggression. "Couldn't he explain it in a good way," the user Aishat Imanalieva wrote, in particular. "It's necessary to do it without aggression; Islam forbids aggression," the user Aslan has advised.

Much fewer commentators have approved the behaviour of the author of the video. "I personally made remarks more than once in a humanly way, but they wouldn't understand," the user RusLan Omarov wrote, in particular. "Emotions really run high when you see something like this," the user Mur Mag has noted.

This article was originally published on the Russian page of 24/7 Internet agency ‘Caucasian Knot’ on August 28, 2022 at 02:29 pm MSK. To access the full text of the article, click here.