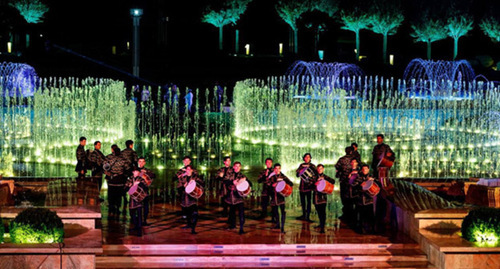 Payment for visiting fountain in Derbent upsets tourists and locals

The introduction of a fee for visiting a light and music show at a new fountain in Derbent is quite justified, but the Mayoralty has raised prices too much, tourists say. The show is visited by whole families; and it turns out very expensive, residents of Dagestan believe.

The "Caucasian Knot" has reported that on September 5, Khizri Abakarov, a Russian State Duma MP, stated that it would be necessary to pay for visiting the show staged at the fountain opened in the Nizami Gyandjevi Park in Derbent. He explained that until now the works of taking care of the park were paid by the Mayoralty, but the city can no longer cope with it. However, social network users have complained that paying 500 roubles per person for attending the show at the new fountain is very expensive, taking account of the transport fare. They wondered why they had built the fountain if the Mayoralty has no money to maintain it.

A big fountain, reconstructed at the expense of the "Sberbank", opened in Derbent on July 16. Telegram users noted that problems with water and electricity supplies persisted in the republic, and offered to build new purification facilities in Dagestan.

The fountain is a complex object; the funds received from the entrance tickets will be used to maintain the equipment, a Mayoralty source has explained, adding that later it is planned to include the cost of maintaining the park into the city budget, after which the tickets to the fountain will cost less or completely abolished.

This article was originally published on the Russian page of 24/7 Internet agency ‘Caucasian Knot’ on September 16, 2022 at 01:16 am MSK. To access the full text of the article, click here.