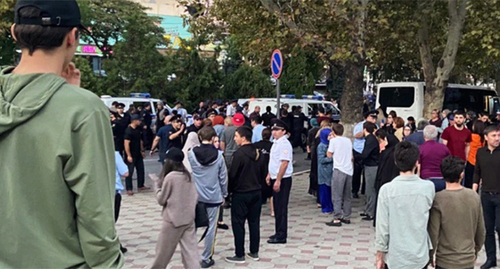 The UN Human Rights Committee pointed to human rights violations in Northern Caucasus and highlighted cases of persecution of Salekh Magamadov and Ismail Isaev, brothers from Chechnya, who were sentenced to imprisonment for aiding and abetting a militant, as well as the suppression of protests against mobilization in Russia. The UN Human Rights Committee also called on the authorities of Russia to repeal the laws on discrediting of the Russian Armed Forces and fakes.

The “Caucasian Knot” has reported that on September 28, the UN called for the release of those detained at protests against the mobilization in Dagestan. During the protest actions held on September 25 and 26, dozens of people were detained, the spokesperson for the UN High Commissioner emphasized.

The UN report states that the Human Rights Committee is deeply concerned about serious human rights violations, including kidnappings, arbitrary detentions, disappearances, torture, and ill-treatment, as well as harassment and killings of human rights defenders. In particular, the UN Human Rights Committee drew attention to the persecution of advocate Marina Dubrovina and journalist Elena Milashina, the official website of the UN Committee reports.

The UN Human Rights Committee also pointed to the persecution of LGBT people, highlighting the case of Salekh Magamadov and Ismail Isaev, and called on the authorities of Russia to take effective measures to combat discrimination and violence based on sexual orientation.

The UN Committee drew attention to the practice of collective punishment in Northern Caucasus, including punishment of relatives of alleged terrorists.

The UN Committee also expressed its concern about the “lack of investigation into serious violations, including the murder of human rights defender Natalia Estemirova.”

Furthermore, the UN Human Rights Committee drew attention to reports about “female circumcision” and “honour killings” in Northern Caucasus. It is emphasized that there is not enough information about what measures the authorities of Russia are taking to combat the above-mentioned crimes.

The UN Human Rights Committee recommended the authorities of Russia to repeal the laws on fakes and discrediting of the Russian Armed Forces, as well as to repeal or revise the laws on foreign agents and undesirable organizations.

This article was originally published on the Russian page of 24/7 Internet agency ‘Caucasian Knot’ on November 4, 2022 at 05:53 pm MSK. To access the full text of the article, click here.