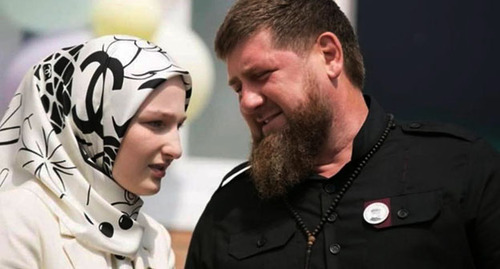 Khadizhat Kadyrova, who heads the Department of Preschool Education of the Grozny City Mayoralty, has been awarded the Order of Akhmat Kadyrov. The daughter of the leader of Chechnya has shown herself to be a talented manager, explains Chechen Minister for National Policy Akhmed Dudaev.

The “Caucasian Knot” has reported that in December 2020, Khadizhat Kadyrova became the head of the Department of Preschool Education of the Grozny City Mayoralty. On February 19, Khutmat Kadyrova, another daughter of the leader of Chechnya, was appointed the deputy head of the secretariat of the republic’s leader.

Earlier Ramzan Kadyrov’s eldest daughter Aishat became the Minister of Culture of Chechnya. On June 23, Aishat Kadyrova was handed over the Order of Akhmat Kadyrov, the highest award of the Chechen Republic, for “an enormous contribution to the improvement of the cultural sphere of the region.”

Khadizhat Kadyrova was congratulated on the award by Akhmed Dudaev, Minister for National Policy, Foreign Relations, Press and Information of Chechnya. “In a short time, Khadizhat Ramzanovna showed herself as a talented manager who raised to a new level the activities of the organization entrusted to her,” the “Chechnya Today” agency quotes Akhmed Dudaev as saying.

The leader of Chechnya himself has the title of honorary academician of the Academy of Sciences of the Chechen Republic, honorary professor of a number of Russian universities, was awarded the orders of Akhmat Kadyrov, “For Merit to the Fatherland” of the fourth degree, the Order of Courage, medals “For Distinction in the Protection of Public Order”, and many public awards.

This article was originally published on the Russian page of 24/7 Internet agency ‘Caucasian Knot’ on November 28, 2022 at 05:24 pm MSK. To access the full text of the article, click here.

Kadyrov's minor son heads children and youth movement in Chechnya, Kadyrov decorates his second daughter with "For Merits" medal, Kadyrov hands out awards to relatives and friends on occasion of centenary of Chechnya.