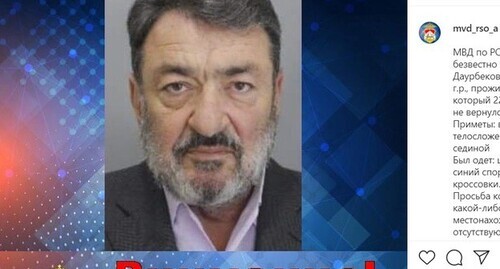 Tamerlan Torchinov was found dead on March 23, 2021. Three residents of North Ossetia were detained on suspicion of committing the murder, two of them have confessed thereto.

According to the Ministry of Internal Affairs (MIA), Tamerlan was kidnapped on March 22 last year at the hippodrome – he was forced into a car and taken away to some unknown place.

The Supreme Court (SC) of North Ossetia has passed on the kidnapping and murder of Tamerlan Torchinov, a deputy of the Beslan City Duma committed in March 2021. Vitaly Torchinov, a casualty's namesake, was sentenced to 14 years in colony, the "Osnova" outlet reports.

According to investigators, Boris and Alan Torchinov were found guilty of complicity in the murder; they helped kidnap the deputy and cover up the crime. Boris Torchinov was sentenced to eight years in colony, Alan Torchinov to 9.5 years.

The SC has also satisfied the suffered party's claims in the amount of 4.9 million roubles, the "Alania" GTRK (State TV and Radio Broadcasting Company) reports.

This article was originally published on the Russian page of 24/7 Internet agency ‘Caucasian Knot’ on November 30, 2022 at 02:01 am MSK. To access the full text of the article, click here.

Relatives of Dagestanis assassinated in Chechnya accuse court of bias, Residents of Dagestan tell about torture and money extortion, Temerkhanov denied his involvement in Budanov's murder.