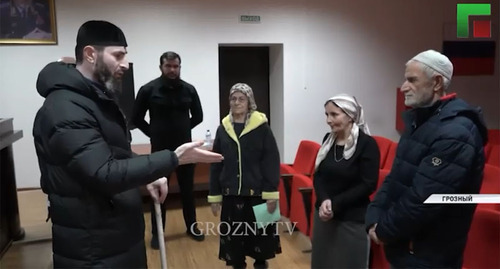 Adam Elzhurkaev, the chief specialist of the Centre for Islamic Medicine, publicly reprimanded two women from Chechnya who were detained by the police for providing occult services.

The “Caucasian Knot” has reported that since July 2019, persecution of residents for the occult services has intensified in Chechnya. So, on March 12, the “Grozny” ChGTRK (State TV and Radio Broadcasting Company) released a story about a woman from Chechnya, who was charged with conducting witchcraft rites.

The “Grozny” ChGTRK posted on its page on Instagram* a video report depicting Adam Elzhurkaev, the chief specialist of the Centre for Islamic Medicine, two women, and several other men.

The video says that Roza Gastieva and Zulai Akhmadova, residents of Chechnya, were telling fortunes by cards. “One of the swindlers, Roza Gastieva, said that she was collaborating with the soul of a Christian hermit monk of Lebanese origin. Her colleague Zulai Akhmadova called herself a fortune teller,” the video description reports.

Adam Elzhurkaev held a prophylactic conversation with the residents of Chechnya.

*On March 21, the Tverskoi Court of Moscow banned the activities in Russia of the Meta Company, owning Facebook, Instagram, and WhatsApp, in connection with extremist activities.

This article was originally published on the Russian page of 24/7 Internet agency ‘Caucasian Knot’ on December 3, 2022 at 06:55 am MSK. To access the full text of the article, click here.