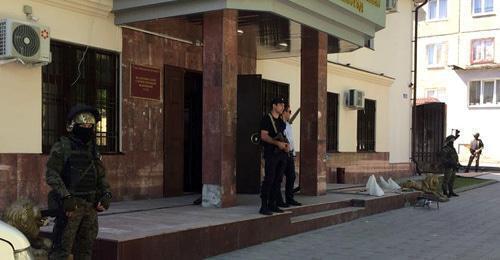 In Nalchik, the Nalchik Garrison Military Court sentenced Umar Sautiev, a resident of Ingushetia, to a year of imprisonment, finding him guilty of leaving for home without permission from his place of service during the mobilization.

The “Caucasian Knot” has reported that on September 24, 2022, an article was introduced in the Russian Federation providing for up to seven years of imprisonment for unauthorized leaving the place of service during the period of the mobilization. On January 22, it became known that Tarkhan Malsagov, a soldier from North Ossetia, was sentenced to a year and three months of imprisonment under the above article.

The Nalchik Garrison Military Court sentenced Umar Sautiev to a year of imprisonment. The court concluded that he left the service for eight days in order to spend time with his relatives, the “Mediazona”* reports.

According to the verdict, Umar Sautiev was called up for service in May 2022, and on September 28, he left the military unit without permission, leaving for home, and did not return to his duty station until October 6.

Earlier, the military man was sentenced for violating the charter “to detention in a disciplinary military unit for a period of 9 months” and did not serve the sentence, so the court decided to sentence him to imprisonment in a penal colony.

*Included by the Russian Ministry of Justice (MoJ) into the register of foreign agents.

This article was originally published on the Russian page of 24/7 Internet agency ‘Caucasian Knot’ on January 23, 2022 at 04:19 pm MSK. To access the full text of the article, click here.

Krasnodar officer to receive monetary allowance for being called up for service during mobilization, Court in Rostov-on-Don denies compensation to contractor for his wound in Ukraine, Chechen contract soldier from Chechnya loses case on dismissal for refusing to go to Ukraine.