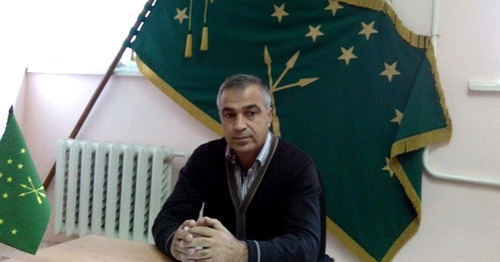 In 2015, Zaurbiy Chundyshko, a public figure from Adygea, held a solo picket in memory of Judy Maf, an 11-year-old Circassian girl, who lived with her parents in the Adyg village of Marj Alsultan and was killed in Syria on September 26. The aim of the picket was to attract attention to the problem of repatriation of Circassians from Syria, where over 200,000 Circassians live.

Zaurbiy Chundyshko is the Chairman of the Maikop city public organization "Adyghe Khase" (Circassian Council). In 2015, the work of the organization was focused at the support and promotion of culture, traditions and customs of Circassians, revival and preservation of the Circassian language. The activists of the organization were rendering material and legal help to repatriates from Syria and other countries.

Mr Chundyshko was nominated for the "Hero of the Caucasus-2015" contest of the "Caucasian Knot" for his persistence in defending his civil position in public interests.

Zaurbiy Chundyshko was born in 1965 in the mountain village of Ponezhukai (65 km north-west of Maikop).

In 1982, he entered the Makeevka Engineering Institute (MEI, Ukraine).

In 1984, he was recruited for his regular military service in the Soviet Army.

In 1992, he graduated from the Kuban State Agrarian University (KSAU) with the specialization of "building engineer".

In 2004, he graduated from the MaikopStateTechnologicalUniversity (МSТU) with a specialization of "manager of state and municipal service".

Mr Chundyshko worked in the construction industry in different positions, from a foreman up to the head of the construction site section, and also in the education system in the position of the logistics engineer, director of the training and production facilities of the university, and the Deputy Rector on Construction and Housekeeping Unit of the МSТU.