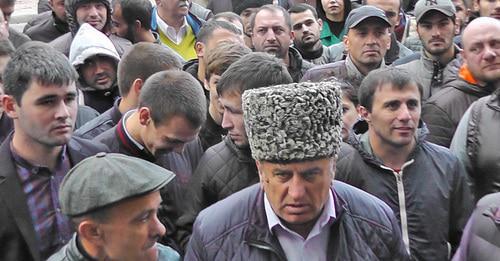 Today, fifteen supporters of Ruslan Gvashev from Abkhazia, who were travelling to Krasnodar in order to attend the trial of his case, spent four hours at the police station of the village of Enem in the Republic of Adygea. Activists from Kabardino-Balkaria were allowed by the police to continue their travel after the trial was over.

The "Caucasian Knot" has reported that today the Krasnodar Territorial Court has upheld the fine imposed on Ruslan Gvashev, a former head of the Council of Elders of Circassian Shapsugs, for his prayer at the Tulip Tree. Gvashev himself did not go to the court because of his poor health, but his supporters were stopped by law enforcers on their way to Krasnodar.

The above delegation from Abkhazia, which included "respected people, party leaders, and a former Abkhazian presidential candidate" was detained at the entrance to Krasnodar, said David Dasaniya, the creator of the initiative group in Gvashev’s support.

Policemen behaved very politely and apologized to the detainees, he has added. "They just fulfilled the order; and we understand it," Mr Dasaniya said.

In his opinion, "Krasnodar law enforces decided not to get involved" with the activists from Abkhazia, leaving the issue of their travel to their colleagues in Adygea.

"Because of this situation, Russia's image in Abkhazia was severely damaged; it doesn’t look like relations of allies," David Dasaniya has stated.