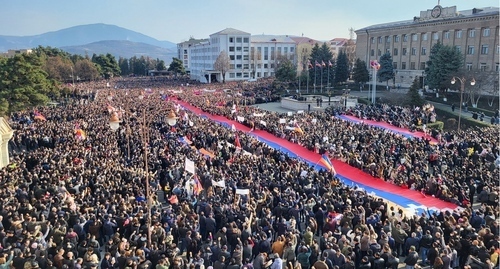 Persecution of pacifists and activists in Southern Russia, continuation of the blockade of Nagorno-Karabakh, intensification of repressions in Azerbaijan, – see the review of these and other events in the Caucasus during the week of December 19-25, 2022, prepared by the “Caucasian Knot”.

Persecution of pacifists and activists in Southern Russia

In Southern Russia, the persecution of residents who oppose the special military operation in Ukraine continues. Last week, courts were again considering the cases against Mikhail Benyash*, an advocate known for his involvement in the cases instituted against people detained at rallies, who was subjected to widely known persecution in a case on the use of violence against a public officer. The advocate was also included in the list of foreign agents and suspended from conducting cases as an advocate. The Russian Ministry of Justice (MoJ) demanded to deprive Mikhail Benyash* of his advocate status.

On December 20, in Rostov-on-Don, a court replaced the suspended sentence imposed on activist Anastasia Shevchenko in a case on collaboration with an undesirable organization with three years of imprisonment in a penal colony. The short film “Anastasia” reporting about the persecution of the activist is included in the list of 15 candidates for the Oscar award.

On December 24, in Moscow, a court sentenced Darya Polyudova**, an activist from the Krasnodar Territory, to nine years of imprisonment, finding her guilty of creating an extremist community and publicly justifying terrorism. Darya Polyudova** is serving her six-year sentence pronounced on May 31, 2021, for justifying terrorism in social media posts.

On December 20, the Southern District Military Court considered a comment posted by Farid Kuramagomedov, a resident of Dagestan, the justification of terrorism and fined him 350,000 roubles. In Rostov-on-Don, a court found local resident Ivan Alekseev guilty of discrediting the Russian Armed Forces and fined him. Natalia Snisar, a resident of Krasnodar, was fined 30,000 roubles for her approving comment under a post in Telegram about setting fire to a banner with the letter Z.

On December 21, a court received an administrative case against Nadezhda Starushek under the article about discrediting the Russian Armed Forces. On the same day, the court imposed a fine of 40,000 roubles on Volgograd activist Tamara Grodnikova for failure to pay a fine under the article on discrediting the Russian Armed Forces, and now the activist must pay 70,000 roubles within two months.

On December 22, blogger Vasily Shevtsov, who left Russia after the mobilization had been announced, reported that his parents were detained in Astrakhan. The defence found violations in the protocol of detention, and on December 24, in Astrakhan, a court released the blogger’s parents without imposing any punishment on them.

Continuation of blockade of Nagorno-Karabakh

On December 25, 10 tons of humanitarian cargo, including medicines and baby food, were delivered from Armenia to Nagorno-Karabakh. And four foreign citizens with chronic diseases were taken from Nagorno-Karabakh to Armenia. A four-month-old child in need of urgent medical care was transported from Stepanakert to Yerevan also with the help of the International Committee of the Red Cross (ICRC).

A number of villages and towns in the unrecognized republic faced a shortage of food. So, in Askeran, stores introduced a restriction on the number of food products, such as flour, sugar, and sunflower oil, per person. Meanwhile, Stepanakert hosts mass rallies of thousands with marches to the post of Russian peacekeepers. The worried residents demand from the peacekeepers to unblock the traffic along the Berdzor (Lachin) Corridor.

Meanwhile, in Yerevan, protesters demanded to unblock the Berdzor (Lachin) Corridor, recognize the independence of Nagorno-Karabakh, and bring international peacekeepers into the region. The activists threatened to go to the unrecognized republic and unblock the route. They also accused Russia that the peacekeepers did not want to ensure the Karabakh’s connection with the world.

On December 20, in response to the Armenia’s appeal, the European Court of Human Rights (ECtHR) obliged Azerbaijan to let seriously ill people and those left homeless through the Lachin Corridor. At a meeting in the UN Security Council, the representative of France called for “immediately unblocking the Lachin Corridor.” The US representative called the blocking of transport communications between Armenia and Nagorno-Karabakh unacceptable.

Shortage of teachers in Chechnya because of low salaries

In Chechnya, schools have been requested to transfer to the “Republican Fund for Social Support of the Chechen Republic” one-day teachers’ salaries to help orphans. In rural schools, teachers receive such low salaries that they themselves need support, educators complain. The request continues the trend of replenishment of Chechen funds at the expense of public sector employees, analysts point out.

For the first six months of 2022, the lowest salary of a school teacher in the country was recorded in Chechnya, and it was 26,712 roubles per month, follows from the data released by the “Rosstat” (Russian Federal State Statistics Agency). At the same time, the average teacher’s salary in the country amounted to 57,067 roubles in January-June.

On December 23, Muslim Khuchiev, the chair of the republic’s government, reported that 29 new schools for 17,184 places had been put into operation in the republic. However, for example, Shirvani Zadaev, the principal of the school No. 1 in the village of Zandak, said that there were not enough teachers in educational institutions in Chechnya. According to the staff of the republic’s schools, in order for the profession of teacher to become in demand, it is necessary to increase the salaries of teachers.

Intensification of repressions in Azerbaijan

Bakhtiyar Gadjiev, the head of the “Institute of Public Policy”, accused of hooliganism and contempt of court, is under arrest. On December 15, the court refused to grant his complaint about the arrest, and the activist went on a hunger strike. On the eighth day of the hunger strike, his dizziness increased, and on the tenth day, doctors warned Bakhtiyar Gadjiev about the risk falling into a coma.

During a protest action held in support of Bakhtiyar Gadjiev, almost 60 people were detained. Tofig Yagublu, a member of the coordination centre of the “National Council of Democratic Forces” (NCDF) and the “Musavat” Party, was sentenced to 30 days of arrest.

On December 23, the police detained Faig Nagiev, the chair of the Khatai District branch of the Popular Front Party of Azerbaijan (PFPA), Rufat Safarov, the executive director of the human rights organization “Line of Defence”, and journalist Emil Maniev. Azerbaijani journalist and activist Abid Gafarov suffered a clinical death and was transferred to a penal colony from a prison hospital, despite his poor condition.

*Included by the Russian Ministry of Justice (MoJ) in the list of individuals performing the functions of a foreign agent.

This article was originally published on the Russian page of 24/7 Internet agency ‘Caucasian Knot’ on December 24, 2022 at 09:00 am MSK. To access the full text of the article, click here.