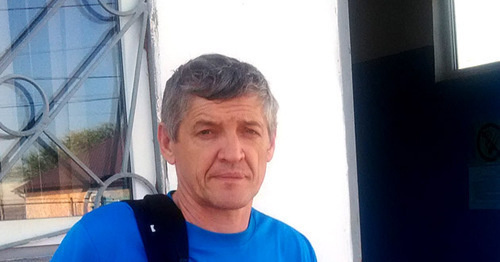 Igor Stenin, the leader of the movement "Russians of Astrakhan", has arrived to a common-security penal colony in the Astrakhan Region. The complaint against the verdict has been filed to the Supreme Court (SC) of the Russian Federation, reported advocate Tatiana Ivanushkina.

The "Caucasian Knot" has informed that Igor Stenin was sentenced to two years of imprisonment in a penal settlement-colony for reposting in a social network of an article about the war in Ukraine.

The "Caucasian Knot" correspondent was informed by advocate Tatiana Ivanushkina that the complaint against the Igor Stenin's verdict was filed to the Supreme Court of the Russian Federation.

The advocate has stated that she treats the court's decision in the case as "unreasonable", since the courts violated the criminal procedure legislation.

The advocate requests the Court to cancel the verdict pronounced by the Soviet District Court of Astrakhan and to send the case to the court of appeal to verify the arguments of the convicted person and his defence in accordance with the legal requirements.