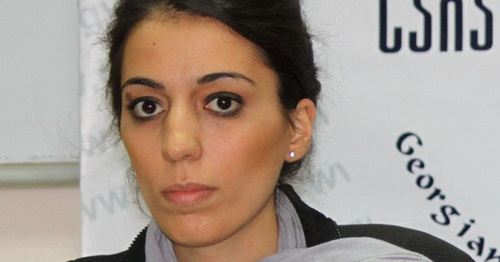 In 2015, Tamta Mikeladze, a lawyer from Ajara and an employee of the NGO “Centre for Training and Human Rights Monitoring”; defended the interests of the owner of the children’s Muslim boarding school in Kobuleti, the closure of which was demanded by local residents; also, she acted as advocate of the LGBT activists, detained in Tbilisi on May 17, 2014, on charge of resisting the police.

She was nominated for the “Hero of the Caucasus-2015” contest of the “Caucasian Knot” for performing her professional duties with a risk to her life and health.

In 2015, Tamta Mikeladze was running the case of the Turkish citizen Mustafa Buyuk, the owner of the children’s Muslim boarding school in the town of Kobuleti. Residents of Kobuleti several times protested against the school, demanding to close it.

In this situation, based on the application of the above NGO “Centre for Training and Human Rights Monitoring”, where Tamta Mikeladze is an employee, a criminal case was initiated against the pressure of Orthodox believers on the pupils and the staff of the boarding school, as well as on the police inaction.

Also in 2015, Tamta Mikeladze defended, as an advocate, the rights of the LGBT activists, whose gay parade in Tbilisi was dispersed by the Orthodox community. Mikeladze’s clients were accused of resisting the police, but due to the properly built defence, criminal cases against 10 activists were stopped; and the court imposed an administrative fine on them. Later, a lawsuit on this case was lodged to the European Court of Human Rights (ECtHR).

Tamta Mikeladze was born on June 1, 1985. She graduated from the Law Department of the IvaneJavakhishviliTbilisiStateUniversity, majoring in public law.

In 2006-2009, Tamta Mikeladze worked for the Ministry of Justice, at the Department of Georgia’s National Representative of Georgia at the ECtHR; and then at National Security Council (2009).

In 2009-2013, she worked as a lawyer and was a member of the Association of Young Lawyers of Georgia.

Since 2013, she is working for the NGO “Centre for Training and Human Rights Monitoring”.