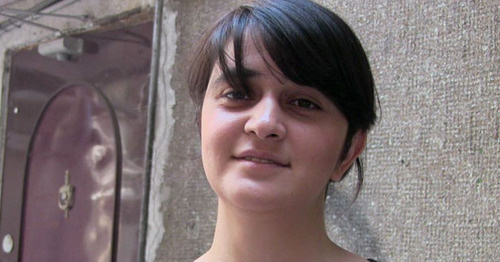 Gyunay Ismayilova is one of the most active members of the Azerbaijani NGO "Institute for Reporters’ Freedom and Safety" (IRFS). In 2015, despite the pressure and persecutions, she organized, on the volunteer basis, monitoring of court trials against human rights defenders and journalists, and published information about human rights violation in Azerbaijan. In January 2015, after the start of trials against human rights defenders Rasul Jafarov and Intigam Aliev, whose interests she is defending, Ismayilova was attacked by an unidentified person.

She was nominated for the "Hero of the Caucasus-2015" contest of the "Caucasian Knot" for her performing professional duties with a risk for her life.

In 2015, Gyunay Ismayilova took a leading part in the activities of IRFS activists, who on the volunteer basis, without remuneration, monitored the trials against human rights defenders and journalists, and informed international organizations about human rights violations.

On January 26, 2015, an unidentified man attacked Gyunay Ismayilova in the doorway of the house, where she rented an apartment. The Ministry of Internal Affairs (MIA) announced the start of the investigation only a few days later, after local and foreign media began writing about the incident. In the opinion of Ms Ismayilova herself, the aim of the attack was to intimidate her or to temporarily deprive her of the ability to work.

Dunja Mijatovic, the OSCE Representative on the Freedom of Media, expressed her concern about the attack on the human rights defender. She called on the Azerbaijani authorities to conduct a prompt and comprehensive investigation and to ensure Ismayilova’s security.

In 2009, she graduated as a lawyer from the Law Department of the “Khazar” PrivateUniversity in Baku.

Since 2009, she is a member and deputy chair of the NGO "Institute for Reporters’ Freedom and Safety" (IRFS). Besides, she works as a lawyer of the organization.

In 2011-2012, Gyunay Ismayilova was the manager of the online television "Objective TV", by actively contributing to implementing the project of impartial informing citizens about the human rights situation, because under the total control over TV broadcasting by the authorities there is no political pluralism.

At the same time, she actively participated in the public campaign Expression Online Initiative, aimed at focusing the attention on the problems of restricting the freedom of expression on the Internet.

Being a lawyer, Gyunay Ismayilova also defended the rights of arrested activists at civil processes. Thus, in the autumn of 2014, she acted as a witness on the part of the human rights defender Rasul Jafarov, who was litigating with the Joint-Stock Company “Bank Respublika”, which in July 2014 unreasonably blocked the activist's accounts, when he was on a foreign business trip.