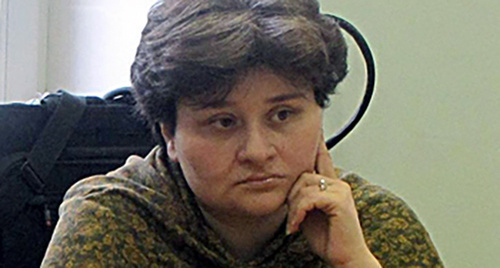 Over a long period of time, Dina Alborova, an activist and political analyst, has fought for the rights of non-government organizations (NGOs) of South Ossetia, which were under pressure from the authorities.

She was nominated for the “Hero of the Caucasus-2015” contest of the “Caucasian Knot” for making public the facts, which are usually hushed up.

The “Law On Non-Commercial Organizations”, adopted by the government of South Ossetia in April 2014 following the similar Russian law, introduced the term “foreign agent”. As a result, a number of NGOs of South Ossetia, which earlier were treated by the authorities of South Ossetia with suspicion, found themselves in a difficult situation, namely, they began to be harassed in mass media, pressured and threatened.

When commenting on that initiative, Dina Alborova stated that for South Ossetia such steps, unlike Russia, were non-actual and even harmful, since looking for enemies among the “three and a half NGOs, which are on their last legs, is the top of cynicism.”

In October 2015, in protest against the authorities’ pressure on NGOs, Dina Alborova, who was then heading the “Agency for Socio-Economic and Cultural Development of South Ossetia” (ASECD), decided to liquidate her organization. At the same time, she promised to continue her activities on the development of the republic’s civil society. “The profession of a political analyst allows me working at the local, regional and international levels,” Dina Alborova has stated.

The above liquidated “Agency for Socio-Economic and Cultural Development of South Ossetia”, headed by Dina Alborova, was implementing humanitarian aid projects in the republic and dealt with educational and cultural programmes. The organization was founded in 1998.

Also in 2015, Dina Alborova was not afraid to criticize a number of articles of the Integration Cooperation Agreement of Russia and South Ossetia, signed by Vladimir Putin and Leonid Tibilov. In particular, she had questions about the structure and implementation of the articles of the Agreement.

In 2015, Dina Alborova opposed the idea of a referendum on South Ossetia’s accession to Russia. According to her version, in the conditions, when, on the one hand, people have not got rid of the fears of the past, and, on the other hand, they have not yet seen the advantages of sovereignty, holding the referendum is unfair in relation to them.

Dina Alborova was born in the city of Staliniri (modern Tskhinvali).

In 1988-1993, Ms Alborova studied social and political sciences in Minsk, at the BelarusianStateUniversity.

In 1993, she started teaching the issues of political sciences and conflict resolution at the Division of Political Sciences and Social Studies at the South-OssetianStateUniversity.

In 1996-1999, Dina Alborova dealt with the problems of refugees and repatriates in South Ossetia as the project manager of the Norwegian Refugee Council.

In 1998-2000, she worked as a manger of programmes on self-support of refugees and repatriates in South Ossetia under the International Rescue Committee.

Since 2000, Ms Alborova was heading the Agency for Social, Economic and Cultural Development.

In 2015-2016, was an invited fellow collaborator at the GeorgeMasonUniversity in the USA.