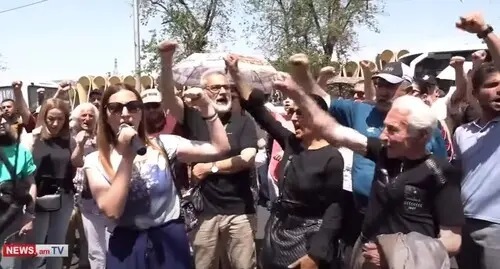 The opposition in Armenia has no revolutionary potential, and due to its links with the previous and current authorities, it failed to achieve broad public support, the political analysts interviewed by the "Caucasian Knot" believe.

The "Caucasian Knot" has reported that the opposition is holding actions in Yerevan demanding the resignation of the Armenian Prime Minister, Nikol Pashinyan; the protests were launched on April 25 after the Premier's statement about a possibility of "lowering the bar" on the status of Nagorno-Karabakh.

Suren Surenyants, a political analyst, sees no revolutionary potential in the Armenian opposition. "The parliamentary opposition is in fact a criminal oligarchy, which is a priori incapable of revolution. The maximum that it can is a putsch or palace intrigues. The society knows nothing about the protest movement, and how decisions are made there. People see only Ishkhan Sagatelyan, a Vice-Speaker, but he is only a moderator who makes statements on behalf of the protest movement. In the absence of a charismatic leader, the society has a legitimate right to suspect that Sagatelyan is the moderator of Robert Kocharyan and Serzh Sargsyan," Mr Surenyants has noted, adding that the public wonders why the opposition had failed to solve the Nagorno-Karabakh problem while being 20 years in power within the framework as it offers now.

The parliamentary opposition has no chances of coming to power; there are no prerequisites for a revolution, Armen Vardanyan, a political analyst, believes. "And the opposition understands this. It has no broad public support; its leaders are not perceived by the society. I don't exclude that should the protest movement was led by politicians who were not tainted with ties with the former and current elites, a change of power could be achieved," Mr Vardanyan has concluded.

This article was originally published on the Russian page of 24/7 Internet agency ‘Caucasian Knot’ on June 8, 2022 at 02:25 am MSK. To access the full text of the article, click here.