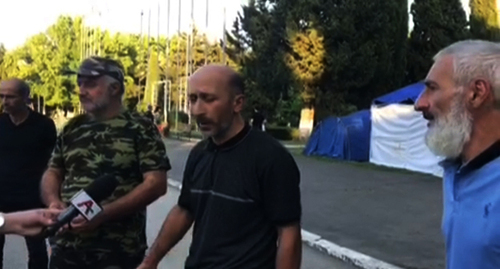 The leadership of Abkhazia has ignored the people's gathering announced in Sukhumi against the transfer of the Pitsunda state dacha to Russia. In this regard, the hunger strikers put forward a demand for the resignation of the government and announced the refusal to drink water.

The "Caucasian Knot" has reported that on July 22, in Sukhumi, Djansukh Adleiba, an activist, went on a hunger strike demanding to reduce motor fuel prices and prevent the transfer of Abkhaz lands to Russia. During the five days of his action, more than 10,000 people signed a demand to reduce the gasoline price in Abkhazia, but the authorities did not react to the protest action.

Djansukh Adleiba and Vadim Markholiya and Zaur Gunba, invalids of the 1992-1993 war, who have joined him, are hunger-striking in Sukhumi; now, they refused to drink water and change their demands, Mr Adleiba has informed, adding that local authorities reacted with complete indifference to the people's gathering announced by him.

On July 21, the Parliament of Abkhazia asked the Constitutional Court to check the agreement signed earlier this year on the transfer of the state dacha in Pitsunda to Russia for compliance with the law. Some of the Abkhaz politicians have stated the inadmissibility of the alienation of people's property. On the same day, Aslan Bzhaniya's meeting with residents of the village of Machara in the Gulripsh District of Abkhazia ended ahead of schedule due to his conflict with the audience, which arose from Adleiba's question about the agreement on the transfer of the Pitsunda state dacha to Russia.

This article was originally published on the Russian page of 24/7 Internet agency ‘Caucasian Knot’ on July 29, 2022 at 09:24 pm MSK. To access the full text of the article, click here.