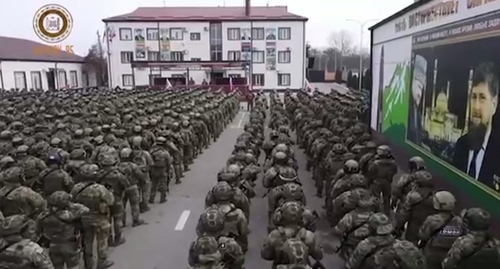 Kadyrov reports about completion of enlistment in “Akhmat-1” battalion

More than 2000 people have been enlisted in the “Akhmat-1”, a new special unit of the “Rosgvardiya”, and the fighters are ready to go to Ukraine, Ramzan Kadyrov announces.

The “Caucasian Knot” has reported that on October 28, the Russian Defence Minister announced that partial mobilization had been completed in Russia, and on the same day, the deputy commander of the “Akhmat-1” OMON (riot police) battalion of the Chechen Department of the “Rosgvardiya” (National Guard of Russia), called on unemployed residents of the republic to join the military unit and go to Ukraine.

The appeals of the Chechen commanders from the “Rosgvardiya” were preceded by the Ramzan Kadyrov’s report that 23 Chechen fighters were killed and 58 others were wounded in the Kherson Region.

Ramzan Kadyrov has announced that the enlistment in the “Akhmat-1” OMON battalion, the new structural special unit of the Chechen Department of the “Rosgvardiya”, is successfully completed. The leader of Chechnya has also added that Alikhan Shavkhalov, the commander of the “Akhmat-1” OMON battalion, “proved himself excellent” in the special military operation in Ukraine.

On September 6, Ramzan Kadyrov announced that “several thousand determined volunteers and elite fighters” were preparing to be sent to Ukraine. The Chechen leader also added that two new regiments and three battalions had been created.

This article was originally published on the Russian page of 24/7 Internet agency ‘Caucasian Knot’ on November 20, 2022 at 04:55 pm MSK. To access the full text of the article, click here.

Families of Chechen residents who perished in Ukraine are promised short Hajj, Kadyrov and Alaudinov respond to reports about Chechen fighters killed near Lisichansk, Chechen commander calls on unemployed to go to the frontline.