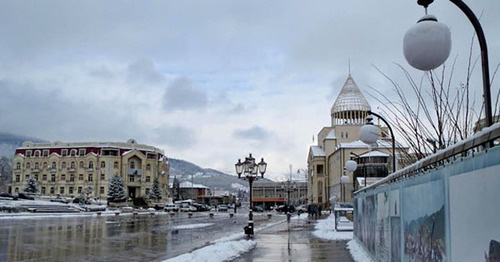 How the unrecognized republic lives through a gas and transport blockade; ongoing protests in defence of Saakashvili in Georgia; and Kadyrov's conflicts with the Urus-Martan and Batal-Khadji people, – read about these events in the review of the main events in the Caucasus during the week on from December 12-18, 2022, prepared by the "Caucasian Knot".

On December 12, Azerbaijani activists blocked the Stepanakert-Goris highway; and this deprived residents of Nagorno-Karabakh of transport links with Armenia and the outside world. Besides, the transport links of the villages of Lisagor, Mets Shen, Khin Shen and Eghtsaokh of the Shusha District with Stepanakert were interrupted. On December 17, the road was still closed. The road blockage has affected the work of intercity transport and medical teams, and made it impossible to send five seriously ill patients from the Stepanakert Medical Centre to a Yerevan hospital. More than 1100 residents of Nagorno-Karabakh remain in the territory of Armenia, including 270 children who could not return home.

On December 17, a rally held in Yerevan demanded from the UN to send international peacemakers to the region, claiming that the Armenian authorities' pro-Russian policy fails to contribute to solving the problems of Nagorno-Karabakh residents. Since December 14, Artak Beglaryan, an adviser to the State Minister of Nagorno-Karabakh, has been holding an endless sit-in picket near the building of the UN office. Armenian doctors come out to the UN office for two days in a row.

On December 13, Nagorno-Karabakh authorities reported that Azerbaijan had stopped supplying gas to the unrecognized republic; and on December 14, the economy mode of consuming fuel and electricity was introduced in Karabakh. Azerbaijan is not involved in cutting off the natural gas supply, since the region is supplied from Armenia, the "Azerigaz" Company has stated. The gas supply has been restored, but the road remains closed, Ruben Vardanyan, a Karabakh Minister, said on December 16.

Saakashvili is again at centre of Georgia's political agenda

On December 15, three MPs from the "United National Movement" (UNM) Party went on a hunger strike in the parliament building demanding medical treatment for Mikheil (Mikhail) Saakashvili after the Penitentiary Service had released a video from the ward with the former president of Georgia. The next day the fourth MP joined the hunger strike. On December 14, Saakashvili himself went on a hunger strike, but Members of the European Parliament (MEPs) asked him to stop it, promising to mobilize efforts to protect his rights.

On December 9, the Tbilisi court had to decide whether to suspend the execution of Saakashvili's sentence or release him. However, the Penitentiary Service was unable to ensure his remote participation in the session, and it was rescheduled for December 22.

Saakashvili's supporters have held several protests. On December 14, they gathered outside the courthouse in Tbilisi. On December 17, outside the French Embassy, they turned to French authorities asking them to assist Saakashvili's supporters in his release. On the same day, a rally was held at the residence of the President of Georgia. President Salome Zurabishvili has demanded to stop speculations around Saakashvili. On December 18, about 100 Georgian writers called to release the former president and send him for medical treatment abroad.

What happened in Chechnya: Urus-Martan and Batal-Khadji people

On December 10, in Urus-Martan, a conflict broke out of local residents with a GIBDD (traffic police) inspector. A man slapped the inspector, who in response opened fire into the ground. Residents of Urus-Martan became eyewitnesses of the conflict; and on December 11, Ramzan Kadyrov addressed them. "I'm instructing officers of Chechen special forces to go to Urus-Martan. You have a choice – either fight with them, or we'll send you to the special operation zone. Prove that you are men," he has stated.

On December 12, more than 500 law enforcers were involved in searching for the citizens who were eyewitnesses of the conflict. The retired law enforcers, interviewed by the "Caucasian Knot", assessed that the authorities' reaction to the minor conflict was excessive. Local residents complained about the oppressive situation in Urus-Martan after the law enforcers' conflict. As a result, authorities had to gather local elders, calling on them to educate the youth.

In November, Kadyrov stood up for the Belkharoevs. He stated that the term "Batal-Khadji terrorist community" is absurd; and Belkharoevs will always be his friends.

Cooperation with Kadyrov in training detachments to be sent to Ukraine was an attempt for the Batal-Khadji people to "whitewash" amid arrests of members of this vird (family clan) and the disclosure of the murder of Ibragim Eldjarkiev, a political analyst and an adviser to the head of Ingushetia believe.

This article was originally published on the Russian page of 24/7 Internet agency ‘Caucasian Knot’ on December 19, 2022 at 01:20 pm MSK. To access the full text of the article, click here.