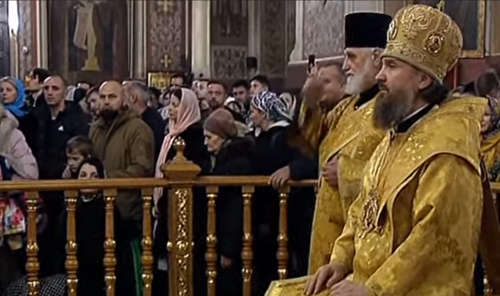 In the churches of Southern Russia, Christmas services were held under heavy security guards. In their Christmas statements, religious figures and officials mentioned the special military operation (SMO) in Ukraine.

The authorities of the regions of Southern Russia have reported that the churches on Christmas night were taken under heavy guard. At the divine services, residents of Volgograd prayed for peace and personal well-being. They were guarded by policemen.

On January 7, believers of the Russian, Georgian, Jerusalem and Serbian Orthodox Churches celebrate their Christmas; and liturgies are held in churches. Believers of the Armenian Apostolic Church celebrate Christmas on January 6, and Catholics on December 25.

In the Astrakhan Region, the Christmas services were guarded by more than 500 employees of interior bodies, the fighters of the "Rosgvardiya" (Russian National Guard), as well as by members of volunteer people's squads and Cossacks, the local branch of the Russian Ministry of Internal Affairs (MIA) reported in its Telegram channel.

Bishop Vsevolod of Akhtuba and Enotaevsk has stated that "the difficult past year" has become a "test." "On the blessed Christmas night ... let us pray for an end to all internecine strife and bitterness," his words are quoted in the website of the Diocese.

In his congratulation, Evgeny Naumov, the Krasnodar Mayor, mentioned the militaries, who are taking part in the SMO in Ukraine.

Believers were congratulated on the Christmas by Batu Khasikov, the head of Kalmykia, who also touched upon the SMO. "Even in the most brutal wars, there was an unspoken tradition of a Christmas truce. Many Orthodox people live in the war zones in Ukraine; they are celebrating Christmas on January 7," he wrote in his Telegram channel.

This article was originally published on the Russian page of 24/7 Internet agency ‘Caucasian Knot’ on January 7, 2022 at 09:05 pm MSK. To access the full text of the article, click here.