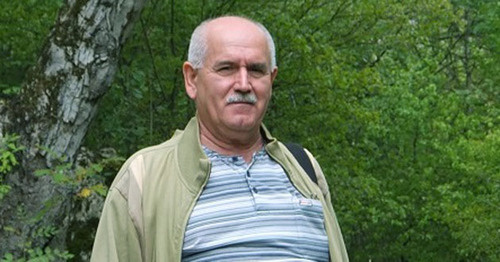 In 2015, the social activist Albert Voskanyan achieved the resumption of monitoring the penitentiary establishments of the Nagorno-Karabakh Republic (NKR). He defended prisoners’ rights and was engaged in activities of social rehabilitation of former prisoners.

Mr Voskanyan was nominated for the “Hero of the Caucasus-2015” contest of the “Caucasian Knot” for his particular achievements in helping people.

In 2015, Albert Voskanyan managed to achieve the resumption of monitoring the NKR’s penitentiary establishments by sending letters to the President of the NKR and meeting the staff of the presidential administration and MPs. As the result, the human rights organization “Centre for Civil Initiatives”, headed by Voskanyan, began monitoring, in the monthly format, the Shushi Prison and the SIZO (pre-trial prison) of the NKR’s police.

On May 21, 2015, Albert Voskanyan spoke in Stepanakert at the roundtable “Problems of Former Convicts. Monitoring Penitentiary Institutions of the NKR”, where he told about the monitoring, in particular, of the above SIZO and the Shushi Prison.

In mid-August 2015, Albert Voskanyan participated in discussing the rehabilitation problems of former prisoners in the NKR, held in the office of the Stepanakert Press Club after the screening of the Russian documentary “Unfortunates” about prisoners’ life.

In late August, Voskanyan lectured to the staff of the Shushi Prison on “Minimum Standard Rules of the United Nations on Treating Prisoners”.

Besides, he cooperated with former prisoners and their families towards reintegration into the society, in particular, by helping with employment and solving family problems.

Albert Voskanyan was born on May 19, 1957, inBaku, Azerbaijani SSR, into the family of Zaven Voskanyan, a native of Nagorno-Karabakh, a drilling foreman.

In 1972, he moved to Stepanakert, the administrative centre of the then Nagorno-Karabakh Autonomous Region of the Azerbaijani SSR.

In 1975, he took his regular military service in the Group of Soviet Troops in the Democratic Republic of Germany. Afterwards, he worked in interior and national security bodies of Nagorno-Karabakh, after which he retired on superannuation.

In June 1993-July 1997, he was Deputy Chairman of the State Commission of Nagorno-Karabakh on prisoners of war, hostages and missing persons. During this work up until now, he exchanged about 300 people and more than 110 bodies and remains. Hundreds of hostages and prisoners of war of Armenian, Azerbaijani and other nationals were exchanged and repatriated with Mr Voskanyan’s direct participation.

Since 1999, Albert Voskanyan is a part of the International Working Group for searching missing persons and hostages, and for releasing prisoners of war in the Karabakh conflict zone.

In October 2002, Albert created the Karabakh Human Rights Non-Governmental Organization “Centre for Civil Initiatives”, where at present he is the director.