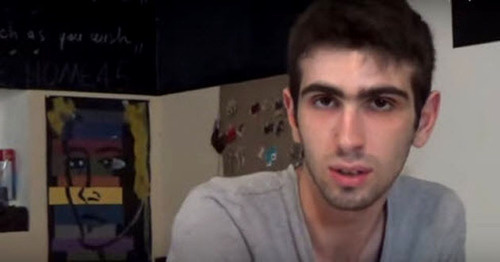 Gerbert Gevorgyan is a member of Yerevan art group “Counterstrike”, which responds to resonant events in the society, both in Armenia and abroad. In 2015, he actively participated in graffiti actions in support of employees of the “Nairit” Factory, Shant Arutyunyan, the organizer of the “Million Mask March”, and other political activists.

Mr Gevorgyan was nominated for the “Hero of the Caucasus-2015” contest of the “Caucasian Knot” for defending his position in public interest.

In January 2015, Gerbert Gevorgyan and other members of the “Counterstrike” made graffiti “Gyumri! There’s a way out!” in solidarity with the demonstrators in Gyumri protesting against the refusal to give out Valery Permyakov, a soldier of the 102nd Russian military base, who had massacred the Avetisyan family in Gyumri.

Throughout 2015, the members of the group painted graffiti in support of Shant Arutyunyan, the organizer of the “Million Mask March” and the leader of the “Tsekhakron” Party, who was sentenced to six years on a charge of hooliganism, Zhirair Sefilyan, the arrested leader of the movement “100 Years without Regime”, and Pavel Manukyan, a member of the oppositional “Constituent Parliament” and a Karabakh war veteran, who was arrested in 2015 on suspicion of preparing mass riots.

In May 2015, in central Yerevan, art activists of the “Counterstrike” made graffiti in support of the employees of the “Nairit” Factory, who demanded the payment of their salary debts.

In February 2015, art group Counterstrike made graffiti with the image of Boris Nemtsov in protest against political killings.

Another graffiti of the group was made in connection with the events in Syria; it depicted a Kurdish guerrilla fighter, who defended his borders from the ISIL (a terrorist organization, banned in Russia by the court).

In 2015, the court imposed a fine (of 58,000 drams (about 120 US dollars) each) on Gerbert Gevorgyan and Artak Gevorkyan, another member of the “Counterstrike” group, for the action they held in November 2013, when the art activists stretched a banner in front of the Armenian Parliament reading “Herzhik Sui” in protest against giving the Russian language the official status.

He studied at YerevanStateUniversity, but later was expelled therefrom.

He participated in numerous protest actions.

Gerbert Gevorgyan is a member of the “Counterstrike” art group, which responds to significant events in society, both in Armenia and abroad.

In December 2013, in protest against Armenia’s accession to the Customs Union, the fence of the Armenian Parliament was decorated by the poster with an image of Russian President Vladimir Putin and inscription “Know your enemy!”.

On February 24, 2016, the members of the “Counterstrike” held, in front of the residence of the President of Armenia, an action in support of the engineer Vardges Gaspari, a political prisoner and a civil activist: they went down on the carriageway. In November 2016, the court found Gerbert Gevorgyan, a member of the “Counterstrike” art group, guilty of disobeying the lawful demand of the police and fined him by about 111 US dollars.

In March 2016, Gevorgyan and other members held an action in front of the National Assembly of Armenia in support of political prisoners. Young people tied themselves to the gate at the central entrance.