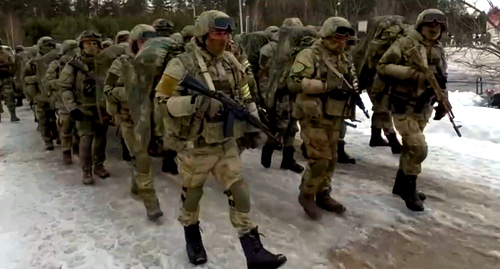 During the six days of Russia's special military operation in Ukraine, a lot of rumours and conjectures have appeared. What is really known about the participation of Chechen law enforcers, about their losses and statements of the republic's leadership, – read the details in the reference material of the "Caucasian Knot".

What is known about losses

On March 1, Ramzan Kadyrov announced two dead and six wounded natives of Chechnya in the hostilities in Ukraine, calling them heroes. Prior to that, he denied reports about losses.

What units are in the territory of Ukraine

In Ukraine, the 141st Special Motorized Regiment "Sever" (North) (commanded by Magomed Tushaev); the battalion "Yug" (South) (under command of Khusein Mezhidov) and the OMON (riot police) unit "Akhmat-Grozny" (commanded by Azor Bisaev) have been noticed. The total strength thereof is about 1200 servicemen.

In his accounts, the head of Chechnya has shown the equipment and ammunition allegedly captured on February 26 in Ukrainian military unit No. 3018. "Evaluate the equipment that our fighters have captured. Guess the origin thereof! These are the special vehicles Bandera supporters get; and we take them away from them," Kadyrov wrote under the photos.

Tens of thousands are ready

The rally in Grozny on February 25 gathered several thousand Chechen law enforcers. Speaking to them, Ramzan Kadyrov, in particular, said that more than 70,000 volunteers were ready to go to fight in Ukraine.

Why Chechens go to Ukraine

The head of Chechnya said that Chechen fighters had left for Ukraine in order to fulfil Putin's orders and protect the Ukrainian people. He has added that another mission of Chechen militaries is to settle "personal religious scores."

On participation of Caucasians on the side of Ukraine

According to some unverified reports, Chechens, Ingushes and Dagestanis are fighting on the side of Ukraine, with a total number of 200-300 people.

Evaluation of the ongoing special operation

On the fourth day of the special military operation, the head of Chechnya turned to the President of Russia with a request to give some order to speed it up and make it more efficient. "If the Ukrainian people and their armed forces don't want to have a dialogue with us <…>, then we must finish what we had started, and do it promptly," he stated, in particular.

What Kadyrov claimed prior the special operation

In January 2022, Kadyrov said that if he were the head of state, he "would have taken Ukraine a long time ago" by sending troops there. Later, by mid-February, he softened the rhetoric by stating that it was his personal opinion.

This article was originally published on the Russian page of 24/7 Internet agency ‘Caucasian Knot’ on March 1, 2022 at 09:41 pm MSK. To access the full text of the article, click here.