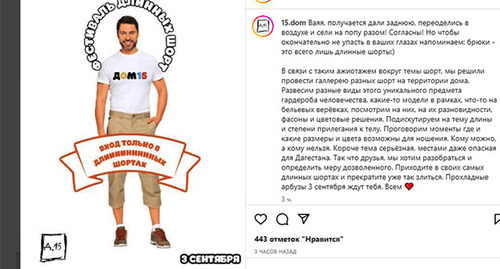 After condemnation in social networks, organizers changed format of shorts festival in Makhachkala

The announcement of the shorts festival in a Makhachkala institution has caused a flood of criticism in social networks against the organizers, after which they announced a change in the format of the event, calling it a "festival of long shorts".

The "Caucasian Knot" has reported that in July 2021, Dagestani authorities drafted a memo for the guests coming to the region. In particular, it states that when visiting Dagestan, female tourists should not wear tight-fitting jeans and short skirts, and men are advised not to wear shorts.

The intention of the Makhachkala institution named "Dom.15" to hold a shorts festival sparked a strong reaction in social networks. The event was scheduled for September 3. After commentators have criticized the idea, the organizers deleted the post, the "Kavkaz.Realii"* outlet has reported.

"Initially we planned to have a farewell to the summer event on September 3; and we'll hold it. But we had to delete the post because of threats; there were a lot of them and they were too tough," a café source explained the situation to the outlet.

On August 31, a post entitled "Festival of Long Shorts" appeared on the Instagram** account of the "Dom.15" institution, in which "due to the hype around the topic of shorts," the organizers announced that a "gallery of various shorts" would be exhibited on September 3, and also invited people to discuss the topic.

*This is a Radio Liberty's project, which was included by the Russian Ministry of Justice into the register of foreign media outlets acting as foreign agents.

**On March 21, the Tverskoi Court of Moscow banned the activities of the "Meta" Company (which owns the Facebook, Instagram and WhatsApp) in Russia in connection with extremist activities.

This article was originally published on the Russian page of 24/7 Internet agency ‘Caucasian Knot’ on August 31, 2022 at 05:42 pm MSK. To access the full text of the article, click here.